3 Ways to Get Greater Engagement on Your Facebook Ads

Face it: Facebook has a whole bunch of engaged users.

The site doesn’t just boast the largest user base of any social media,

The average conversion rate across industries on this platform is 9.21%.

Just look at the 75% greater ROI earned by retailers who advertised on Facebook.

But a Facebook ad is only as effective as the amount of engagement it earns.

Whether that’s measured in likes, clicks, impressions, or other other goal, earning greater engagement on your Facebook advertisements should be a constant goal.

Here are three tips you need to know for getting greater engagement and ultimately increasing conversions with your Facebook marketing.

1. Narrow Down Your Audience

Sure, there are over 2 billion people on Facebook. But are all of them your target consumers?

No, instead there is a group of demographics or people out their with certain behaviors that are more likely to engage with your brand.

Facebook advertising makes it easier to hone in on who these people are with its extensive audience targeting tools.

To begin creating a selective audience for your Facebook ads, start by going to the Audience section within your Ad Set on Ads Manager. 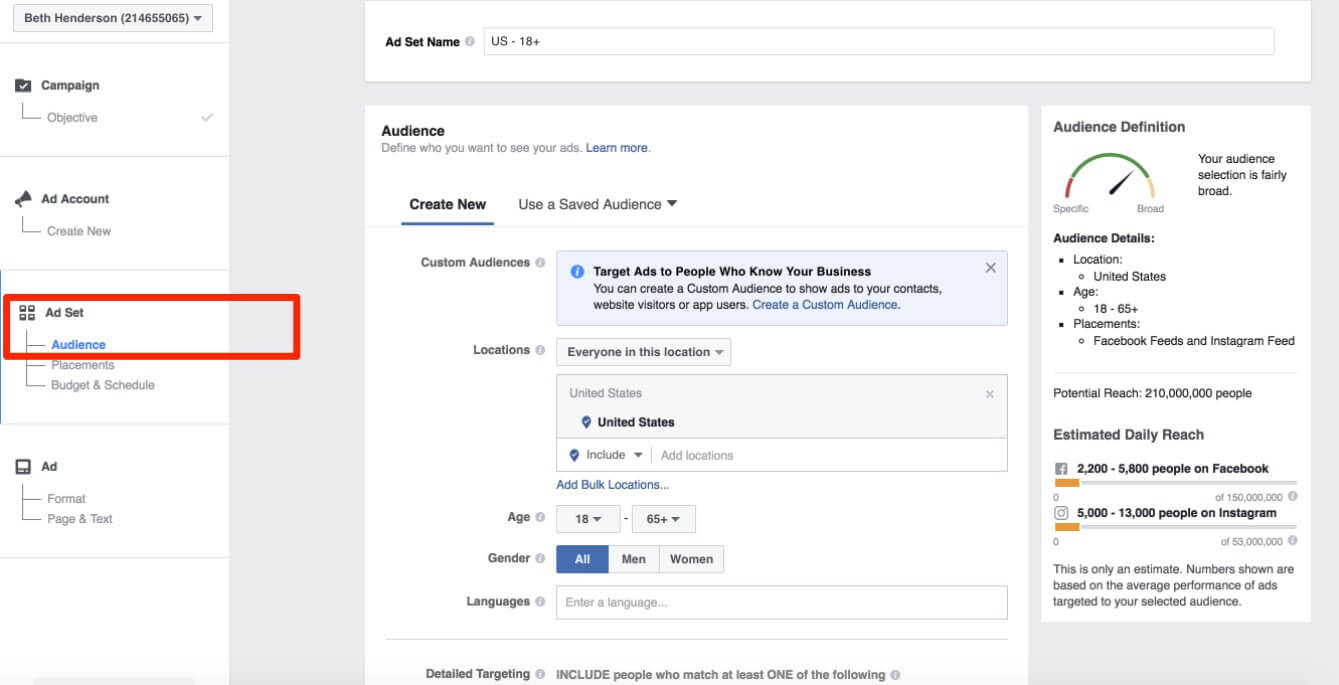 If you are strictly a brick-and-mortar retailer, you’ll only want to target a single location, which is the city in which your business is located.

If you are a brand looking to expand your reach or an online retailer looking to attract customers from another region of the U.S. or internationally, adjust the target location accordingly.

Then, set the distance radius.

Again, this should be based on your business.

Small mom-and-pops should target closer to their stores, while larger brands should opt for a greater distance for their Facebook advertising. 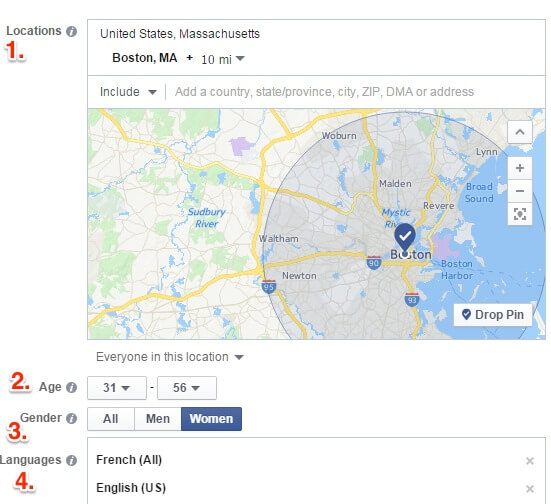 Then adjust the age range, select the gender, and lastly choose the target language.

The more selective you get with these steps, the more effective your Facebook ads can be.

Reaching the right group of people means getting greater engagement, as they’re more inclined to interact with your brand. 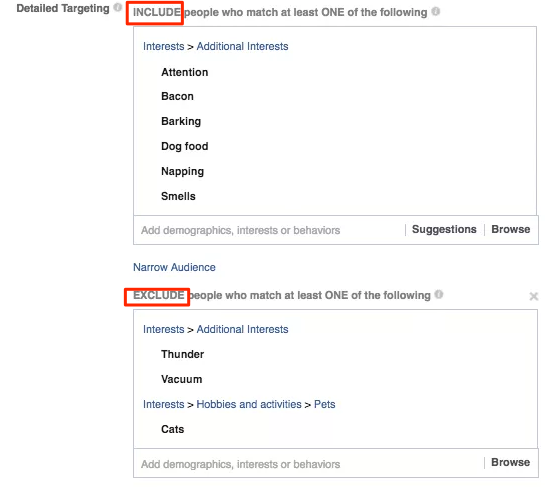 The detailed targeting section is where honing in on an audience truly becomes possible.

Here, you have the option to include or exclude people based on demographics, interests, or their behaviors.

So let’s say you own a pet store.

You would target people in this detailed section with people interested in dogs, cats, dog food, and perhaps two to three other pet-related interests.

You would exclude people who would be looking for a product or service you don’t offer. For example, exclude ‘dog walking’.

It all comes down to be extremely picky and specific with your target audience.

Doing so is one of the best ways to boost CTR, increase conversions, and improve overall engagement with your Facebook ad.

People want to know something works before they take action on it.

This doesn’t just apply to purchasing a product.

Now more than ever thanks to the proliferation of fake Facebook ads and accounts, people are skeptical.

When people see quantitative or qualitative evidence about what a brand is offering in their Facebook ad, they’ll trust it more and therefore be more likely to engage.

Not only does this ad above work by putting a friendly, smiling face in front of viewers, but also it provides a specific success story.

E-GMAT is certainly counting on it, and has this testimonial to instill confidence in their potential customers to help them convert. 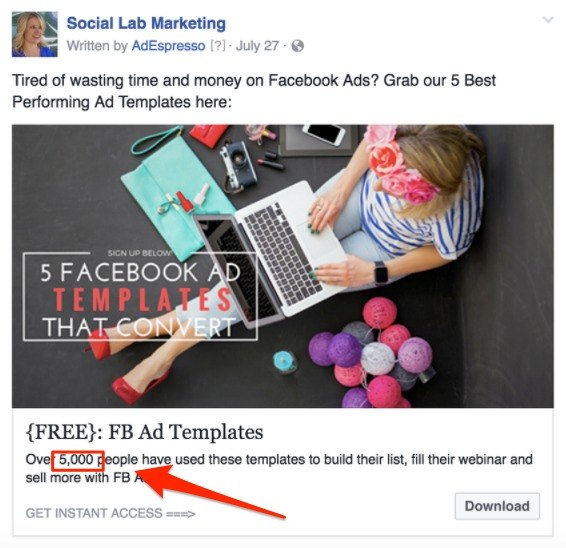 Here again, the purpose of this Facebook advertising campaign is to let people know the product/service works, and to provide assurance that other people are fans, too.

If you’re a person just coming across this Facebook ad, you see that over 5,000 other people downloaded these templates.

Well, 5,000 other people probably knew what they were doing, too, right?

The first thing someone sees with your Facebook advertisement is the headline.

To put it into perspective just how important this piece is, consider that 8 out of 10 people will read a headline.

The headline is also what will convince people to either bypass your Facebook ad or keep on reading and engage.

So what goes into the perfect headline?

Well, to start there’s the length.

When it comes to what to write, Facebook ad headlines with questions have been shown to yield 150% greater clicks.

When the question includes the word “you”, this engagement jumps to 175% greater clicks.

Consider what resonates most with your audience with A/B testing, but always remain concise and specific.

Once you’ve grabbed people’s attention with your headline, get them to keep reading with compelling Facebook ad copy. 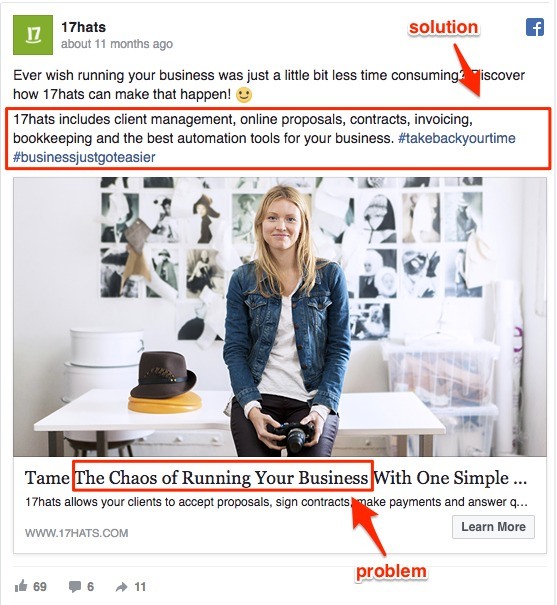 One of the most effective Facebook ad copy formats addresses a problem and lets customers how the company will solve it.

The headline is the relatable bit, where people will see an issue that they’ve experienced.

Then, in the copy the problem is reiterated and the solution is posed.

Find your customer’s pain point and address it in a plain and simple way that explains how your brand is the solution.

They’ll feel encouraged to engage because your Facebook ad has provided real value to them in the form of a problem solved.

For even further inspiration, you can look at the best Facebook ads from 2016 and see what they’re doing with copy and more in order to succeed.

There’s no formula or secret to cracking the code of Facebook ad engagement.

Instead, getting greater engagement on your Facebook ads is a matter of knowing your audience, crafting a compelling ad, and A/B testing to keep on improving.