How to Start Advertising on Snapchat

On May 4, 2017 Snapchat officially entered the digital advertising game.

They introduced their self-service ad platform and made it possible for businesses other than major enterprises like Coca-Cola and Bud Light to market on their app.

Since then, Snapchat has earned over $262 million in revenue in Q2 2018, grew their daily active user base to 188 million, and have been steadily increasing their average revenue per user (ARPU).

This is a platform that enjoys huge engagement numbers:

This is also a platform whose audience is that golden demographic: Millennials.

So you’re probably asking yourself, “How do I start advertising on Snapchat?”

The audience is there, the tools are there, and the potential boost to your bottom line is waiting.

We’re talking tens of millions of views, massive lifts in purchase intent, and improvements to conversion rates unseen on any other social media platform.

It’s time to understand the steps it takes to advertise on Snapchat.

If your company has a Snapchat account, you can go ahead and use these credentials to create an official business account. If not, it’s time to sign up for one!

Once you’ve established your official account, you’ll be invited to the Business Manager. 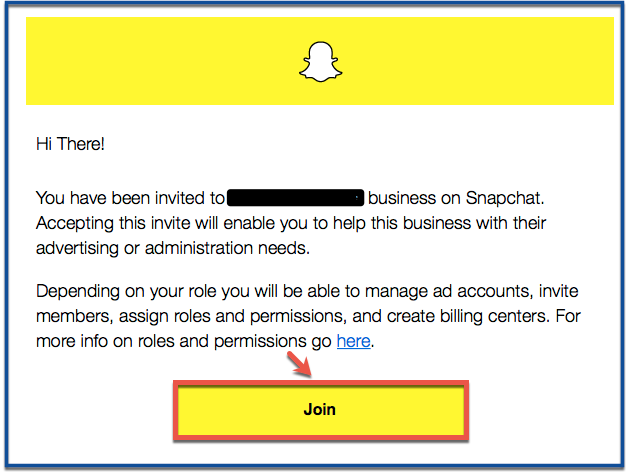 After you join, you can login to your account and begin filling in the required details and payment information.

Step 2 – Fill in Your Business Information

Before you can actually start creating ads and launching your Snapchat advertising campaign, you need to set up billing information and fill in relevant business details.

Once you’ve signed into Business Manager, you’ll be greeted with a screen to fill in your company’s information.

On the following page, you’ll fill in the payment information you’d like to use and set up a Billing Center.

If you want to change this in the future or set up an additional Billing Center, you can do so from the Business Manager dashboard.

Then, select Settings and the +Billing Center icon. 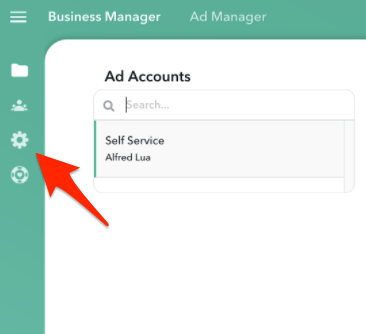 Fill in the appropriate billing info, hit “Save”, and now your business is all set to start running Snapchat ads.

Step 3 – Set Up Your Campaign

To launch your first Snapchat ad campaign, head to the Ad Manager dashboard.

Within Ad Manager, there are options for Dashboard, Creative Library, Custom Audience, and Help Center.

Under Dashboard, you can select the +New Campaign icon, where you’ll first choose your Snapchat marketing objective.

Then, you can set up the start/end dates, and lastly, give your Snapchat ad campaign a name. 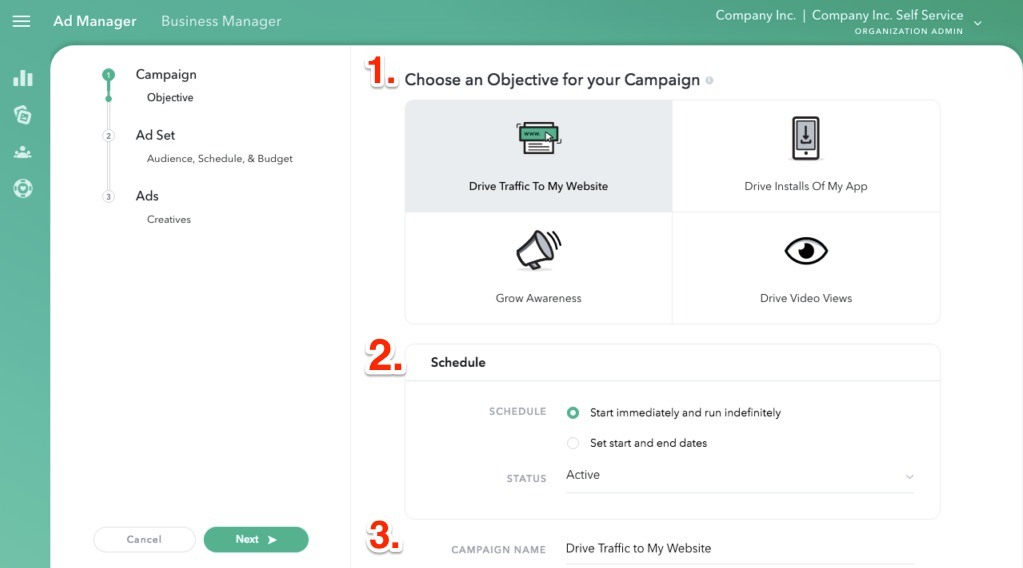 Just like with any other social media marketing or advertising strategy, make sure your naming conventions follow some sort of set of rules so you stay consistent and organized.

Now that your campaign has been set up, it’s time to launch your first Snapchat ad set.

Following the rules you set up for naming your ads, first give your ad set a simple but informative title.

Then, fill in your audience targeting sections.

This starts with Geography. Here, you can choose to include or exclude certain geographic locations for your Snapchat ad to appear.

Next, select Demographics. You can get incredibly granular here, presenting an excellent opportunity for A/B testing and optimizing your Snapchat ads. 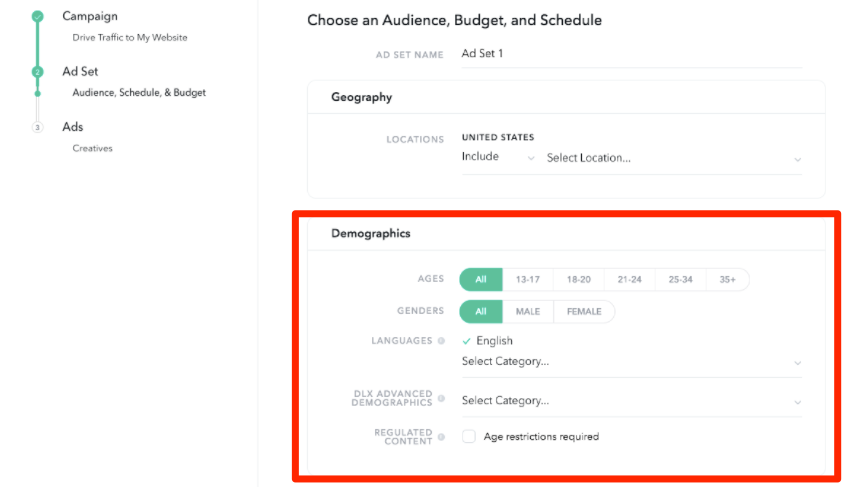 Under the Audiences section, you can either choose from Snapchat’s pre-selected options or create a Custom Audience.

The fixed options include targeting based on factors ranging from behavior on Snapchat (Lifestyles) to their viewing habits (Viewers). 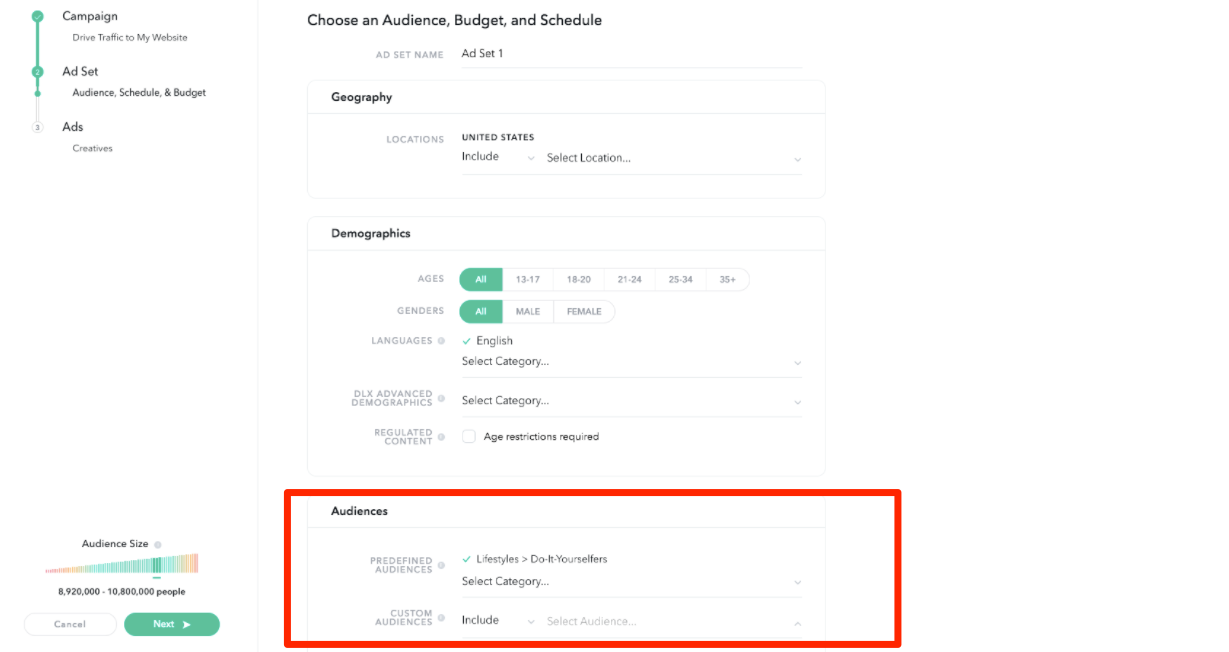 Then, it’s a matter of choosing the placement of the ad (where it should appear within Snapchat) and refining the devices to target.

Finally, determine your budget and schedule.

For the budget of your Snapchat ads, you will be charged based on how many times your ad appears.

You are not charged per conversion, but instead on this measurement.

Therefore, set your bid at the value you assign to each goal completion.

Similar to when you first set up your Snapchat Ad account, the schedule options refer to your start and end date.

Keep in mind that this duration can be less than the ad campaign’s total amount of time because you will likely have multiple ad sets under a single Snapchat ad campaign.

After completing the logistics, it’s time to create your ad.

Step 5 – Get Creative With Your Snapchat Ad

You’re now in the final steps of launching your Snapchat ad.

This is the creative section, where you’ll design the appearance and format of your Snapchat advertisement.

First, select the type of ad that you’d like to run (e.g. Top Snap). 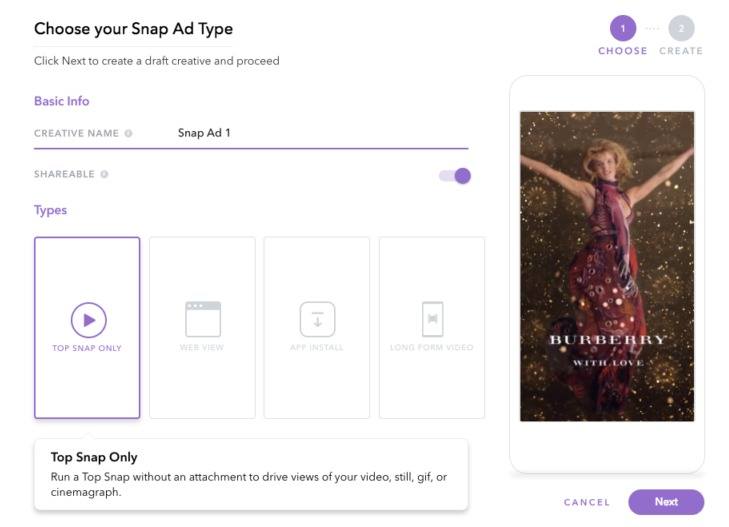 Once you’ve chosen what type of Snapchat ad you’re running, it’s time to actually create it.

The specifications on this page will vary based on the type of ad you selected.

In general, expect to input a headline name, brand name, and CTA along with the visual media itself.

Keep in mind that there are specific design specs for each type of Snapchat ad, so make sure you adhere to these before submitting for review.

Step 6 – Publish Your Ad and Monitor the Results

After you’ve clicked Launch Campaign on the following page, your ads will be submitted for review and approved.

Once you go live with your Snapchat ad, keep checking in under the Ad Manager dashboard (which is also accessible on mobile).

With information ranging from eCPM (effective cost per thousand impressions) to Swipe Ups, you have the information at your disposal to monitor and optimize your Snapchat marketing.

Make sure you’re looking at the results for not just one ad set, but also putting them into the context of the entire campaign.

You can also download a CSV of the report in order to disseminate the results of your Snapchat marketing internally or with clients.

With everything now up and running, it’s up to you to edit the budget, A/B test, and monitor your Snapchat advertising campaign’s overall performance.